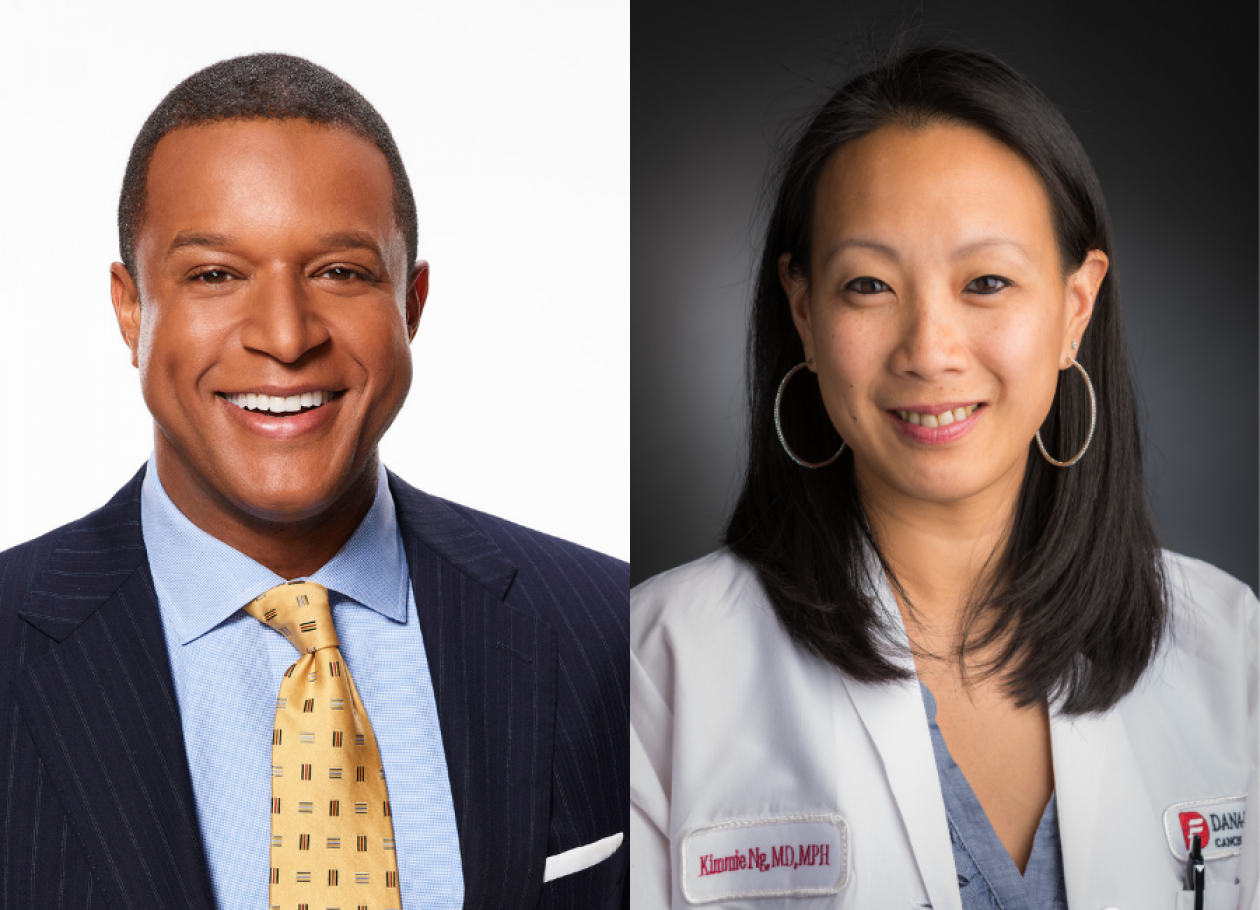 When the U.S. Preventive Services Task Force released its draft guidance to lower the colon cancer screening age from 50 to 45 in November 2020, Craig Melvin was on the story.

The alarming rise of young adult colorectal cancer cases—51% higher since 1994, with the sharpest increase among those age 20 to 29—was, however, news to the Third Hour of TODAY anchor and MSNBC Live host in 2016 when Mr. Melvin’s brother, Lawrence Meadows, was diagnosed with stage IV colon cancer just after his 39th birthday.

As his brother began treatment, Mr. Melvin began using his media platforms to inform viewers about colorectal cancer symptoms, the need for preventive screenings, and the disproportionate death rates facing Black patients—the highest among any minority or ethnic group in the United States. Sadly, Mr. Meadows died in December 2020 at age 43.

Dr. Kimmie Ng credits Mr. Melvin’s coffee talk about topics like stool and colonoscopy preps with increasing public awareness and action around colon cancer. Dr. Ng is the director of the Young-Onset Colorectal Cancer Center at the Dana-Farber Cancer Institute and a two-time Conquer Cancer-funded researcher, receiving a Young Investigator Award in 2008 and a Career Development Award in 2010.

In the following Q&A, Dr. Ng (who has periodically been interviewed on NBC’s The TODAY Show) turns the tables on seasoned interviewer Mr. Melvin.

KN: The spotlight you have shined on young adult colon cancer in recent years influenced larger discussions on the issue. How did it feel to learn of the screening guideline change?

CM: I was ecstatic, naturally. Colon cancer is treatable if caught early, and it’s good to know the medical community has recognized that. Hopefully, this leads to insurance companies following suit and covering screening. Of course, it would have been nice if the guidelines had come 5, 10 years ago, before Lawrence was diagnosed. But, I was happy. Very happy.

KN: Your brother, Lawrence, became an advocate for screenings after his diagnosis. You featured one of my patients, the late Patrick Beauregard, who was so committed to raising awareness [about gastrointestinal cancers], on TODAY. What impact do patients have when they share their stories?

CM: The impact when patients share their stories is immeasurable. In fact, I would contend that’s one of the things that has actually moved the needle over the past few years—people in the prime of their youth who have been stricken with this despicable disease sharing their stories. It grabs folks who are watching by the collar—people don’t necessarily identify with medical journals or articles and things of that nature, but when people see and/or hear someone who looks like them or who occupies a similar station in life, it makes a mark. They think, "Oh, there but for the grace of God, go I,” or “That could be me,” or “That could be my brother or my sister.” And that moment becomes a catalyst for change or action.

KN: Research indicates the colorectal cancer mortality rate among Black patients is linked to insufficient treatment access more than biology. What can health and community leaders do to close this gap?

CM: I think the first step is awareness. The conversations that we’ve started, the conversations that we’re having now are going to go far. I think we talked a lot about health care disparities across the spectrum, not just colon cancer disparities. Black and brown people are predisposed to so much more than their white counterparts. And we know that now. That’s not necessarily something that we knew or did anything about 10 to 15 years ago, and we’re doing that now, so I think that’s a win.

More significantly, I think about the fact that people who look like me are having conversations about their family history. My family only started asking questions once Lawrence was diagnosed. Lo and behold, our grandmother had colon cancer. She didn’t die from it, but she was diagnosed with it, and we didn’t know anything about it until we started talking to my dad and he said, “Oh yeah, my mom had colon cancer and she beat it.” And there were one or two other folks who had some colon cancer scares in our family tree. The fact that people are just talking about family history and talking about their colons—that’s a win. That’s something that wasn’t happening a decade ago.

KN: Financial support from Conquer Cancer, the ASCO Foundation launched my early research and later in my career funded my clinical investigations. This funding came at a critical time in my career when I needed support to protect my time to focus on the research and generate the preliminary data that I needed to become an independent investigator. Conquer Cancer also funded the work of Dr. Scott Kopetz, who led a clinical trial at The University of Texas MD Anderson Cancer Center in which Lawrence participated. Before your brother enrolled in a clinical trial, were you aware of the role donors and funding play in advancing breakthroughs for patients?

Colon cancer is a cancer that affects parts of your body that people just don’t talk about. No one talks about their colon, no one talks about their rectum; those aren’t parts of our body that we talk about. As a result, they don’t raise as much money for research. They don’t have as many doctors and cutting-edge scientists devoting their lives to finding a cure for it, as well. I didn’t realize that until Lawrence was diagnosed with it. I don’t think that most people realize it, as well. But one of the things that we’ve been able to do over the past few years is destigmatize and demystify colorectal cancer, and that’s the first part of it. When we can get folks talking about it, that’s halfway up the mountain. I’m proud to have been a small part of that over the past few years.

KN: What is the headline you hope to report on colon cancer in 2025?

CM: “Public Awareness Leads to Increased Screenings, Exponentially More Research Dollars, and Consequently a Survival Rate Higher Than Anyone Would Have Guessed 5 Years Ago.”

This article originally appeared in the March ASCO Connection.